Ai's images, though much smaller in scale, remind me of Canadian artist Edward Burtynsky's massive and visually stunning photographs of "manufactured" industrial landscapes. As a result of Jennifer Baichwal's award-winning documentary film on the artist, Burtynsky has become famous for his towering portraits of several hallmarks of China's industrial progress, including the Three Gorges Dam. However, An Uneasy Beauty, a solo exhibition of the artist's work that recently opened at the Surrey Art Gallery, also as part of the Cultural Olympiad programming, reminded me that he has documented the visible evidence of our planet's collective consumption and waste at sites much closer to home. The Surrey show features 24 images Burtynsky shot in Western Canada between 1985 and 2007, including compositionally precise photos of oil sand extraction sites at Fort McMurray, Alberta, open-pit mines in northern BC, and the container port of Vancouver. 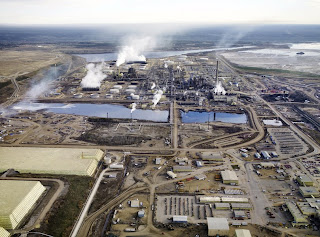 Designed and exhibited as a series, the photos trace both the material roots and spectral routes of our dependence on non-renewable energy resources, a global fuel economy that leads from Alberta's oil fields, through Vancouver's port, to the bulldozers, heavy diggers, and forklifts awaiting start up in Ai's photos of Beijing. The human-altered landscapes in Ai's and Burtynsky's photos are likewise linked in that they are devoid of bodies and yet paradoxically demand of their viewing audiences bodily engagement, a sensorially immersive accounting of how we are locally implicated in these "placeless" spaces by the cars we drive, the food we eat, even the entertainment and sporting spectacles we attend. At the same time, both Ai and Burtynsky have separately stated that their work is not meant to be read as an overt judgment, not as political indictments but as performance indicators. In this, Burtynsky's lens, like Ai's, would find a rich resource of subject matter in the venue building sites of any number of recent or future Olympic host cities, including Vancouver and London: 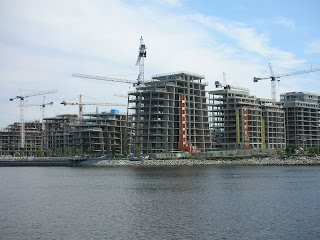 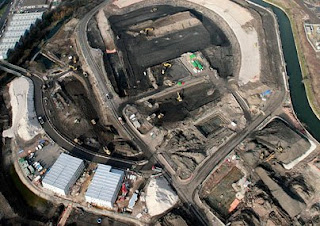 The 2009 PuSh Festival, also the recipient of Vancouver Cultural Olympiad funding, is in full swing. Richard and I have seen three offerings so far:
Lots more from PuSh is on the horizon, and I hope to be back soon with another report on what I've seen.
P
Posted by Peter Dickinson at 8:35 AM No comments:

The contract for the book has arrived. Hoorah! It will appear with Manchester University Press, in their "Theatre: Theory, Practice, Performance" series either late this year or early next. Before the Olympics, at any rate, I've been assured by my editor. Greatly relieved by this, although it does increase the pressure to finish up final revisions and get the typescript off asap. If only world events would take a time-out and allow me to stop tinkering. It's terribly difficult, despite what Benjamin says, to write a history of the present.
Have I mentioned the title? It's called World Stages, Local Audiences: Essays on Performance, Place, and Politics. You've likely sensed a theme.
Our 2009 PuSh Festival passes have also arrived. We're psyched about the shows we've chosen: new work from Marie Brassard and Ronnie Burkett; dance and experimental theatre from Japan; more dance from Toronto and Cambodia; lots of whacky local work; and late-night cabaret at the new Club PuSh the organizers have set up on Granville Island. Am especially looking forward to catching a show there by dragster extraordinaire Taylor Mac.
On the horizon, there's a show at the Vogue by Antony and the Johnsons to look forward to in February, and before that the (imminent, I believe) release of their new album, The Crying Light. I got to interview Antony Hegarty as part of Susan Stryker's TransSomatechnics Conference at SFU Harbour Centre this past May--an amazing experience, and as an added bonus he serenaded conference participants with a short private solo concert.
While the news on the expected cost overruns for the Olympic Athletes' Village in False Creek gets worse by the day, Mayor Robertson and his new Vision team have so far made some bold decisions that are shaking things up for the better at City Hall. First, Robertson fired City Manager Judy Rogers, who bears a lot of responsibility for the False Creek mess, and who had amassed far too much individual power for an unelected bureaucrat. Next, Vision councillors instituted a new Homeless Emergency Action Team (HEAT) that succeeded in getting more than 300 people off the street and into shelters during the recent cold snap in the city. And, finally, there are signs that the new regime is going to be more responsive to culture and arts infrastructure, reversing a decision of the previous administration, for example, that will allow the Vancouver East Cultural Centre, undergoing a massive LEED-certified renovation of its main performance space (a former church on Venables), to also purchase and renovate a second venue nearby.
Now if only the mayor could do something about getting rid of all of this snow. To be fair, he does seem to have ordered up a rather controlled melt so far. The rains have arrived, but not in the force with which they were first predicted.
In Vancouver, that's always worth celebrating.
P
Posted by Peter Dickinson at 3:11 PM No comments: