A brief shout-out to Rice & Beans Theatre's current production of Mobilis in Mobili, on now at Pacific Theatre (12th Ave. and Hemlock) through tomorrow evening. The second installment of the company's "Element Series," the one-act play is a loose adaptation of Jules Verne's 20,000 Leagues Under the Sea--by way of Vincenzo Natali's Cube it seemed at certain points to this viewer.
Writer-director Pedro Chamale, working collaboratively with his cast and crew, makes canny use of Pacific's tricky studio space, and also incorporates lots of innovative movement into the piece (the choreography was by CarliAnn Forthun). Condensing the essence of Verne's story to the choice of death versus joining his crew for unlimited underwater adventures that Nemo (Deneh Thompson) presents his three "rescued" captives--Professor Aronnax (Tristan Bacon), his assistant Conseil (Chelsea MacDonald), and the bull-headed Canadian harpoonist Ned Land (Rase Calvert)--the piece manages to construct an interesting metaphysical exploration of the question of choice versus constraint.
P.
Posted by Peter Dickinson at 10:41 AM No comments:

At the Dancing on the Edge Festival's Edge Five presentation last night at the Firehall, Richard and I thrilled to the premiere of colleague and Objecthood collaborator Rob Kitsos' newest work. In Barego, Kitsos, together with Ballet BC dancers Leon Feizo-Gas and Alexis Fletcher and SFU Contemporary Arts alum Mark Arboleda, offer a meditation on the bar as a space where individual subjectivity and private desires (you can read the invisible slash mark in the title) come up against the rituals of public spectacle and collective judgment. Against a widescreen rear projection film loop consisting of a largely continuous pan of what I took to be the new Charles Bar at SFU Woodward's, and making strategic spatial use of three white barstools (which I like to think of as an homage by Rob to Objecthood), the four dancers mine (and at times mime) the subtle choreography so often exhibited in drinking establishments: from the way we perch on or fall off our stools to the complex sequence of hand and head movements involved in doing tequila shots; from the purposeful tango of would-be seduction to the elegant ballet of blissful inebriation. In solos, duos, and trios, Rob structures his movement around the twin poles of alienation and sociability, display and concealment that are always operating in the space of the bar: by that I mean that the dancers come together and move apart in patterns that telegraph at once the intoxicating effects of fellow-feeling and the sobering estrangement that comes when that feeling is withheld or not returned (including by the self).
Having worked with Rob, I know he likes to play with stage space, and that he is not afraid to have more than one thing going on at the same time movement-wise. I'm with him on this, as static dancers within a mise-en-scène is something that drives me nuts (and an element of Quiet that I couldn't understand, especially as Zaides' twice-repeated placement of his non-moving dancers downstage right effectively blocked the view of the left side of the house). All of which is to say that I appreciated how Rob played with foreground and background in Barego, including the incorporation of the film. One's attention is constantly being divided in a bar--focused near (on one's drink or potential conquest) and far (the animated conversations at adjacent tables, the sports game being broadcast on the television monitor, and so on)--so the fact that ours was as well during various sequences last night felt appropriate.
Acutely aware that bars are also prime sites of talk, with the confession, the boast, and the seduction all vying for performative supremacy, Rob incorporates audio excerpts from bar scenes in popular films into the work. Indeed, Rob himself offers up a memorable lip synch of a speech by Shelley "The Machine" Levene, the character Jack Lemmon played in Glengarry Glen Ross, and it's a treat to watch Fletcher incarnate the dissolute Wanda Wilcox (Faye Dunaway) from Barbet Schroeder's Barfly (Mickey Rourke's Henry to Dunaway's Wanda in that film: "What do you do?" Dunaway/Wanda: "I drink.").
One of the things that makes Rob's work so compelling to watch is that he not a "pure dance" choreographer; less interested in the technical execution of his movement, than in that movement's integration into a larger interdisciplinary aesthetic (one that often includes film/video, music, props, and big heaps of theatricality), Rob offers multiple avenues of access to the questions he chooses to explore. Movement is always central to this exploration, but it is never abstracted or marked off for its own sake. To this end, it is especially exciting to watch the classically trained Fletcher and Feizo-Gaz, so memorable as the leads in Rob's Long Story Short, his contribution to Ballet BC's Surfacing program at the Dance Centre in 2009, cut loose even further in Barego. The program notes state that the dancers had a hand in the choreography, and at moments last night line and extension definitely came to the fore; but Rob's inimitable choreography (where limbs contract and buckle as much as they straighten) kept everyone (dancers and audience alike) suitably off balance.
My one complaint: I wanted the piece to be longer. This definitely feels to me like a piece that can be expanded into something evening-length, and I do hope that Rob continues to work on it.
Actually, I have a second complaint, and it has to do with the work that precedes Rob's on the Edge Five program: Benjamin Kamino's Nudity.Desire. Over-theorized (Agamben, Deleuze, and Zizek are all cited in the program notes) and under-performed, the work betrayed, for me, the worst excesses of bad performance art. Why it's been paired with Rob's piece I cannot fathom. If you're planning to head to the matinee on Saturday (which I urge you to do), perhaps think about arriving at intermission.
P.
Posted by Peter Dickinson at 1:27 PM No comments:

Email ThisBlogThis!Share to TwitterShare to FacebookShare to Pinterest
Labels: Ballet BC, Dancing on the Edge Festival, Firehall Theatre, Rob Kitsos 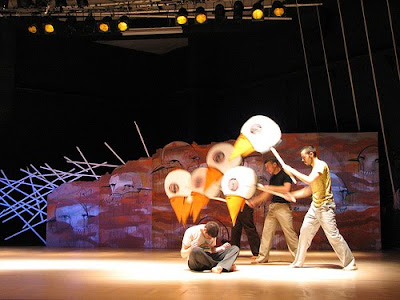 I didn’t get the chickens. At the end of Arkadi Zaides’ Quiet, which had its second and final performance at this year’s Dancing on the Edge Festival last night at the Firehall, three of the four male dancers remove what look like cardboard cutouts of chicken heads—each attached to a wooden strut—from the set designed by Tel Aviv graffiti artist Klone. They then proceed to menace the fourth dancer with them, "pecking" at him with the cutouts as he withdraws inside himself, or scurries across the floor.
One is left struggling with how to interpret the image, especially in a piece that up until that point had traded fairly literally (and at times didactically) in the physical representation of conflict, aggression, mistrust, violence, and the sundry “emergency states” (both internal and external) that have come to characterize the co-dependent relationship between Palestinians and Israelis that is at the heart of Zaides’ work. The intensity of movement displayed by the dancers in Quiet came through loud and clear, and was never less than compelling. And yet I can’t say that, overall, I was very moved by the piece.

And I find that just as perplexing as the meaning of the chickens.

P.
Posted by Peter Dickinson at 2:15 PM No comments: