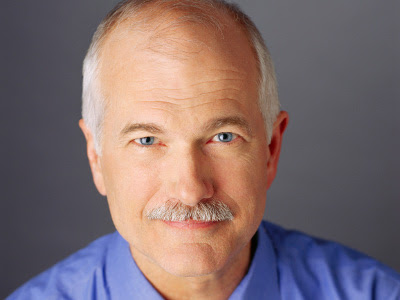 Jack Layton's legacy was ennobled today by the trans-ideological outpouring--from politicians, the media, and the public alike--of praise for his gift of service to our country.

Let us return that gift by answering the call he sets out in his extraordinary final letter, building on the NDP's gains in the last election and ensuring that our government, no matter who's in power, nor for how long, remains accountable to all Canadians.

P.
Posted by Peter Dickinson at 4:26 PM No comments: 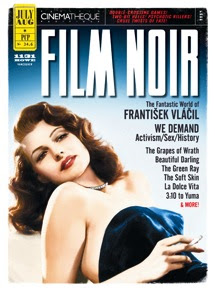 I’ve curated a film series at the Pacific Cinémathèque, running August 25-28 in conjunction with a parallel academic conference called “We Demand: History/Sex/Activism.” Both the conference and the film series commemorate the 40th anniversary of the first recorded national political action undertaken by gay liberationists and lesbian feminist activists in Canada.

The cover of the Cinémathèque program guide got the subtitle wrong, but you can still click on the image above to check out what films and videos I’ve lined up. And click here for more information on the conference.

P.
Posted by Peter Dickinson at 2:11 PM No comments:

An Afternoon with John and Jane

PuSh Communications Manager Kara Gibbs asked me to write a guest post for the PuSh blog on a special fundraising event for the Festival we had last Sunday.

Stay tuned for more PuSh news (both here and at www.pushfestival.ca) in the coming months, including an announcement of the 2012 program.

P.
Posted by Peter Dickinson at 7:07 AM No comments:

Anything Goes at TUTS 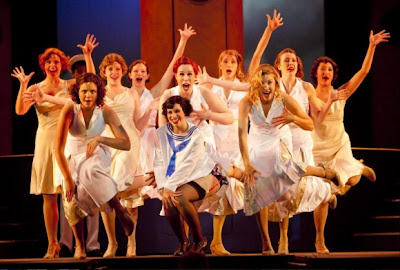 Jacqueline Breakwell (center), as Erma, surrounded by flapping chorines in the TUTS production of Anything Goes

As we have for the past several summers Richard and I made our way to Stanley Park's Malkin Bowl last night to catch Theatre Under the Stars' production of Cole Porter's Anything Goes, on in repertory with Bye Bye Birdie until the end of next week. We picked a perfect night for it: clear skies and warm (I only added my last layer toward the end of Act 2), no wind, and also hardly any bugs.

As a musical, Anything Goes shouldn't work: its featherweight book (co-written by P.G. Wodehouse) is a farce that turns on a sequence of contrived coincidences and barely believable disguises (not to mention heaps of Orientalist stereotypes); the male and female leads are not a couple; and Porter blows his musical wad, as it were, in the first act, which contains the hits "I Get a Kick Out of You," "You're the Top," "It's De-Lovely," and, of course, the rousing title tune and its signature tap accompaniment.

But in Reno Sweeney, the chanteuse-revivalist, who gets all the big numbers, and whose open sexuality and lusty appetites offer a trenchant commentary on social and religious repression and hypocrisy, Porter has created one of the great female musical theatre roles. Indeed, I think it is fair to say that the success of any production of Anything Goes hinges on the successful casting of Reno. Ethel Merman filled the bill in the 1934 Broadway premiere, and her full-throated vocal stylings, caustic comedy, and imposing physical presence have to a certain extent established the template for all Renos to follow, including Patti LuPone in the acclaimed 1987 Broadway revival (interesting side note: Merman and LuPone would also both go on to star as Mama Rose in Gypsy). Most recently, the incomparable Sutton Foster has stepped into Reno's shoes in the current Broadway revival, and judging by the hoofing she did on the Tony Awards in June, those shoes are on fire. In Irene Karas, Vancouver now has its own memorable Reno, big-voiced, warm-hearted, light on her feet, adept at physical comedy, and always leading (or shooting) from the hip.

Granted, I'm no musicologist, but Porter's songs have always struck me as delicate, even ethereal confections, dependent on clever rhymes (most filled with abundant sexual innuendo) and lots of alliteration. With rare exceptions, one would not classify him as a someone who writes songs to be belted. Which is why I was so surprised by Reno's first big second act number, "Blow, Gabriel, Blow," as it sees Porter mining blues spirituals and swing, and allows Karas to explore the rich lower registers of her vocal range. Equally riveting in her two solo numbers is Jacqueline Breakwell as Erma, the seductive moll to gangster Moonface Martin (a terrifically funny Andrew Cownden). Breakwell (pictured above) has a background in burlesque, and it shows in terms of how she is able to put over her songs with just the right combination of sex appeal and comic swagger. Indeed, watching Karas and Breakwell last night, it struck me that through Reno and Erma, Porter was channeling some of his own sexuality; in the frank display of their sexual desires, their unapologetic promiscuity, and the worship they receive from a bevy of handsome sailors, Reno and Erma can partly be read as gay men in drag (and, here, one can also reference the legendary alternative lyrics to songs like "You're the Top," in particular).

Many of the other performances in this production are also winning, including the fleet-footed Todd Talbot as the besotted Billy Crocker, Lauren Bowler (Cathy in last year's production of Singin' in the Rain) as his inamorata Hope Harcourt, and Seth Little as Lord Evelyn Oakleigh, the buffoonish Englishman to whom Hope is disastrously betrothed, and whose rediscovery of the Gypsy within (aided, of course, by the Carmen-like Reno) eventually sets all aright, resulting in a traditional comic closure that features almost as many nuptials as As You Like It, playing across the water at Bard on the Beach.

I'm always amazed at the audiences who turn out for TUTS shows: they represent a cross-section (tourists and locals, old and young, ethnically diverse, etc.) you don't see at other shows. My only complaint last night was that we were too quiet. Everyone on stage was giving 110%, and for the most part our applause was polite and restrained. More whooping and whistles are needed for the final shows.

P.
Posted by Peter Dickinson at 1:47 PM No comments:

Email ThisBlogThis!Share to TwitterShare to FacebookShare to Pinterest
Labels: Anything Goes, Cole Porter, Irene Karas, Theatre Under the Stars 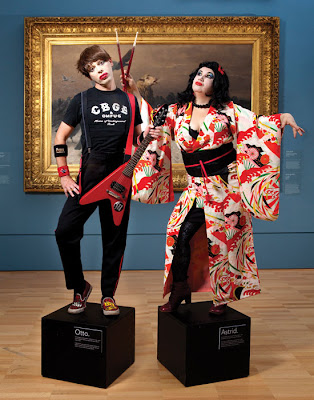 I'm behind on my blog posting, and while I don't have time for a proper review (the Women and Comedy conference at SFU Harbour Centre that I've been helping to organize opens tomorrow), I did want to urge folks to check out Die Roten Punkte's newest show, Kunst Rock, on at the Cultch until next Thursday, and which Richard and I caught yesterday on opening night. Indeed, Astrid did extract a promise from the audience to tell all our friends.
Die Roten Punkte is the life/work performance art project of Astrid and Otto, a brother and sister rock duo whom we're meant to understand are orphans from Berlin (their parents either died in a train wreck or were mauled by a lion--it's not entirely clear), but who may just be a pair of friends/lovers/theatre artists from Melbourne. They're the White Stripes of the Fringe Festival circuit, complete with Astrid on drums and Otto on guitar. They blend parodic punk with hilarious on-stage banter and storytelling, the point of which is usually to highlight Astrid's sybaritic appetites and Otto's self-effacing gullibility.
Apart from one extended bit about the "artiest song" in their repertoire (which begins with Otto sampling the sound inside his head), the "art rock" premise of this show is less a structuring narrative motif than an extended conceit for the elaboration of their performative on-stage selves. In Astrid's case, this begins with her dress, pieces of which she removes to hilarious effect during one of the show's highlights. Indeed, these two are as adept at physical comedy as they are at deadpan comic banter and extravagantly theatrical musicianship (Astrid wielding her drum sticks is a sight to behold). They're also fabulous dancers, as they proved during the evening's encore, a song about a robot who thinks he's a lion that featured Otto on a portable electric keyboard and Astrid on cowbell (!).
Astrid and Otto are guileless performers, so much fun to watch because it's clear they are having as much fun themselves. Indeed, the back and forth between the performers and audience felt genuinely warm, especially during a sequence in which Otto referenced the Vancouver invention of the plastic banana protector.
Kunst Rock is the perfect summertime show, light, breezy, hilarious, and with an infectious beat. Kudos to the Cultch for launching their 2011/12 season early, and with such a winning piece.
P.
Posted by Peter Dickinson at 2:22 PM No comments: