Canadian-born, New York-based choreographer Aszure Barton is back at the Norman and Annette Rothstein Theatre this week with her own company, Aszure Barton and Artists, as part of a Chutzpah! Plus event. The 70-minute Awáa, set to a contrastive strings and brass score commissioned from the Russian violinist Lev Zhurbin and the Canadian saxophonist Curtis MacDonald, was created by Barton while she was an artist-in-residence at the Banff Centre, and features video projections (by multi-talented company dancer Tobin Del Cuore) filmed in the Centre's pool that Barton was inspired to shoot after a particularly vivid dream.

The work certainly has a dream-like, underwater feel to it, especially in the way Barton's bold visual style and sense of theatrical whimsy are married to her seven amazing dancers' impossibly fluid movements, in which arms and heads and torsos extend and ripple out from the body's core like seaweed swaying at the bottom of the ocean floor. A sense of buoyancy is imbued in everything from one dancer's simple toe-rise and modified port-au-bras to the full company's simultaneous shifting of their weight from one hip to another as, sitting with legs outstretched, one foot resting on the other, they drag themselves horizontally across the stage, much like a line of sea crabs.

The company itself is made up of six male and one female dancers, and if there is a thematic through-line to the piece it would seem to revolve around motherhood and masculinity (the title Awáa evokes the sound of both a baby's cry and young child's pronouncing of "water"). In this, Barton's episodic compositional style is both a strength and a weakness, as inevitably some set-pieces--particularly the duets between the riveting and charismatic Lara Barclay and successive male partners--feel more thematically integral and choreographically complex than others. Indeed, the group scenes between the men seem to me to retreat from what I thought would have been a logical opportunity to explore the homosocial dynamics of male bonding, particularly in relation to the mother figure. There are no explicit sequences of male partnering in the piece.

Instead, over and over again the fluidity and ambiguity of male sexuality in Awáa is displaced onto Barton's trio of African-American dancers, who in a bravura sequence late in the piece together reference African tribal dance, Supremes-style girl group shimmying, and the sashaying of drag ball voguing. It was thrilling to watch, but when upon exiting the stage one of the dancers shouts out an Alvin Ailey-esque "Take me to the river," one wonders if Barton isn't trading a bit too heavily on cultural stereotypes.

Such, of course, are the risks of tapping so directly into the unconscious. We can never be sure where our imaginations will take us. We can only applaud Barton for daring to go there--and for inviting us along for the ride.

P.
Posted by Peter Dickinson at 8:19 AM No comments:

Celebrating Schoenberg at Music on Main

Among the important musical centenaries we're celebrating this year (e.g., that of  John Cage's birth), is the premiere of Arnold Schoenberg's landmark composition Pierrot Lunaire, his sprechgesang Opus 21 based on poems by Albert Giraud. (The piece has received many lively stagings in recent years, leading up to its centenary, including a highly theatrical and transgendered dance-theatre take by bad-boy Canadian filmmaker Bruce LaBruce that ran in Berlin last year: check out the short YouTube excerpt here.)

Richard and I were out on a school night to witness Music on Main's All-Star Band, led by conductor Margerite Witvoet, and featuring the brilliant soprano Robyn Driedger-Klassen, perform the piece at the Western Front 100 years to the day after it first bowed in Vienna. A captivating event that I will not be able to do full justice in this short post. What I will say is that this is another spectacular coup in programming by MoM's visionary Artistic Director David Pay, not least because of his genius pairing of the Schoenberg piece with a lively set of cabaret songs and improvisations from the period featuring vocalist Carol Sawyer and pianist Lisa Cay Miller.

In just a few short years, MoM has become one of the most important musical series in the city, and its year-round programming has transformed the SOMA area, and in particular regular venue Heritage Hall, into a major performing arts destination. Of course, we are especially excited at PuSh about our ongoing co-presentations with MoM, and with David's continued cross-support for the Festival.

P.
Posted by Peter Dickinson at 8:04 AM No comments:

Old news, I know, but I'm catching up on my local arts news re-blogging after a week hosting an out of town guest.

To wit: Marsha Lederman's piece in the weekend Globe on the latest lines in the sand being drawn over the will-it or won't-it relocation of the Vancouver Art Gallery.

We're now officially in the territory of farce, are we not? The more pertinent question, however, is why are these discussions all taking place (or not) over canapés and drinks at in-crowd soirées? Where is the city on this, and why is the public being squeezed out of any say on the future of a downtown cultural precinct?

With the downtown Canada Post building now officially for sale, these questions are more pressing than ever. Whether the VAG moves or not, someone should step up and show some dignified leadership.

P.
Posted by Peter Dickinson at 6:13 PM No comments:

Hot on the heels of the recent announcement of the closing of the Granville 7 Cinemas at the end of November, an interview with Festival Cinemas owner Leonard Schein in yesterday's Globe and Mail about the ticking clock on our beloved Park Theatre, just around the corner from us on Cambie Street.

The former announcement puts the future of the Vancouver International Film Festival in doubt (though I would counsel Director Alan Franey to get on the phone to the International Village Cinemas asap). The latter announcement would be a blow to the residents of Cambie Village, who have a wonderful local 300-seat cinema in the neighbourhood that can show everything from 3-D blockbusters to indie art house films. Just this past Thanksgiving Monday Richard and I walked up to catch Paul Thomas Anderson's The Master. I think the movie's been overhyped; but the physical experience of watching it was, as always, most pleasing.

With the Denman Cinema having recently closed, and before that the Hollywood, and the Ridge about to go as well, it would be a shame to lose one of the few remaining old-style, single-picture cinemas in the city.

Whither film in Vancouver?

P.
Posted by Peter Dickinson at 7:38 AM No comments:

Just a brief note to say that The Unplugging, a new play by Yvette Nolan, began preview performances at Arts Club Theatre's Revue Stage on Granville Island last night. Richard and I, along with our good friend Cathy, visiting from the UK, were in the audience.

In the play, Nolan (former Artistic Director at Native Earth Performing Arts in Toronto), has adapted an Athabaskan legend, as recorded by Velma Wallis, called Two Old Women, in which the complaining protagonists of the title are cast out into the wilderness during a time of hardship after they have become too much of a burden on the rest of the community. Forced to rely on each other, and their storehouse of strength, stamina, and skills, the two women thrive against the odds, to the point where the community that has cast them out comes calling for their aid.

In Nolan's version, set in the very near future, she has tapped into the current cultural zeitgeist re our anxiously wired, digital culture (see TV's Revolution), imagining a post-apocalyptic world without electricity. Bern and Elena must re-discover the lost ways of their Aboriginal foremothers, "becoming," in the words of Nolan's script, something new. But the arrival of a mysterious stranger, Seamus, threatens their fragile new community of two. Jenn Griffin (as Bern) and Margo Kane (as Elena) are powerful stage presences, and they are ably supported by Anton Lipovetsky as Seamus. Lois Anderson is the director, with dramaturgical assistance having been provided by Rachel Ditor and my buddy DD Kugler.

I'll have more to say about the play after it officially opens next Wednesday, October 17th, and I get a chance to return for an additional viewing. But I did want to acknowledge how generous Yvette has already been in sharing the script with me--and the students of my Introduction to Drama class at SFU, who will be studying it and the production over the next two weeks.

I also wanted to say that I think the tag line and poster design for the show are among the most savvy that I have encountered in a long time. See below. 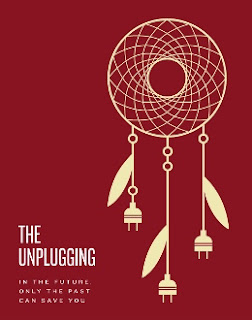 Alive and Well, Thank You

A guest op-ed by Neworld Theatre Artistic Director Marcus Youssef in today's Vancouver Sun rightly attesting to the thriving arts and culture scene here in Vancouver--no thanks to, and in spite of reports otherwise. Thanks for the shout out to PuSh, Marcus.

Last night Richard and I were at SFU Harbour Centre for an event that backs up precisely what Marcus is writing about: a reading and reception celebrating Marie Clements as the 2012-13 Writer-in-Residence in the English Department at SFU. Marie read excerpts from past plays and gave us a taste of what she has in store, including a remounting of The Edward Curtis Project at the National Arts Centre in Ottawa, and a new multi-media musical work, The Road Forward, that will (hurray, again) premiere at Club PuSh this January.

Speaking of all things PuSh, we are a community partner on the upcoming return of Robert Lepage's Far Side of the Moon to SFU Woodward's in November. There's a special PuSh night on November 7th, when a sneak peek of our 2013 Festival will be revealed. The official program guide lands at JJ Bean, Terrra Breads, Festival Cinemas, and other locations the next day. Lots of exciting shows await.

All of which confirms Marcus's point: cutting edge performance is alive and well on Canada's west coast.

P.
Posted by Peter Dickinson at 6:25 PM No comments: