Anniversaries in Movement and Music

Two out of four ain't bad.
At last night's season-ending Double Anniversary celebration of Ballet BC (25 years and teetering in the balance) and The Turning Point Ensemble (simply on fire after 5 years), we were presented with four world premieres by Canadian choreographers, each paired with original music performed live by TPE. But the first and last pieces, former Ballet BC company member Wen Wei Wang's In Motion and Gioconda Barbuto's Touch, left me unmoved--despite the kinesthetic appeal of their titles. Interestingly, both also revealed the greatest debt to classical tradition, with Wang's piece largely performed on point, and Barbuto's trading heavily on extension and line. But pretty poses are not enough if the corps lacks an emotional core, and the only time I felt a real connection to the dancers in either piece was during the gorgeous pas de deux performed by Dario Dinuzzi and Gilbert Small in Wang's piece. This was done to solo violin, with Mary Sokol Brown stepping out from the ensemble (positioned upstage, behind a scrim, one consequence of which was that the music for this first piece, a gorgeous composition by TPE conductor Owen Underhill, had to be amplified through speakers) to literally accompany the dancers centre stage.
For Serge Bennathan's Les chercheurs de dieu and BBC company member Donald Sales' Moththe TPE musicians were back in the orchestra pit and the unamplified sound was much more resonate. As was the dancing. Bennathan's piece, set to a newly commissioned score by Michael Oesterle, reminded me at the beginning of Jerome Robbins and Leonard Bernstein's collaborations in West Side Story. The dancers were moving in packs, low to the ground, with the occasional vertical explosion, arms stretched to the ceiling, hands and fingers pulsing, quickening toward and by an energy other than their own. It was a force that transferred horizontally to the audience as well.
Finally, Sales' Moth, dedicated to the memory of his older brother, was a deeply moving meditation on grief. On a stage lit with tea candles, supplemented by the subtle artificial amber glow created by lighting designer James Proudfoot (who did a superb job lighting all four pieces), five female and one male dancer strip through the layers of denial and blame and guilt in successive solos that in their controlled abandon reveal both the vulnerability and the resiliency of the human body. A final pas de deux between Peter Smida (who has perhaps the perfect male dancer's body) and one of the female dancers (I'm sorry to say I can't remember which) to an "Epilogue for cello and piano" composed by Underhill was just stunning.
BBC Artistic Director Emily Molnar has announced the company's next season, and it is jam packed with visiting companies (including the National Ballet of Canada, which will be celebrating its own 60th anniversary) and new work (culminating in a full evening of pieces by new resident choreographer José Navas). I hope they can do a good sell, as last night's house was pretty thin, even with the added subscription base and audience from Turning Point. Granted, they were competing with a Canucks playoff game (a sad comment on this city). However, I think the company's recovery is still on very shaky ground. Despite the wobbles last night, the risks Molnar is taking in her programming, including cross-disciplinary collaborations like this one with TPE, deserve to be rewarded.
Here's hoping the company is around for at least another 25 years.
P.
Posted by Peter Dickinson at 6:31 AM No comments:

I will cringe through every minute of the federal leaders' debate this evening in advance of casting my ballot on May 2nd, even though I agree with Elizabeth May that the broadcast consortium's vexation over competition from NHL hockey is rather rich in light of their cavalier banning of her from the proceedings. After the federal election (the predicted outcome of which I truly fear), I will look wearily ahead to this summer's provincial referendum on the HST (five whole weeks, apparently, to tick off YES or NO to that one). Depending on those results, we may soon be heading to the polls in BC, though Christy Clark had better win a byelection first (she's just confirmed she'll seek Campbell's Point Grey seat, but not when).
But it's this November's municipal elections that I'm already most preoccupied with. Who to vote for now that it seems Mayor Robertson and Vision Vancouver have definitively lost their way, bowing at every level, it would seem, to unseen elites rather than truly representing the citizens who elected them in the first place? I cite as evidence the following:
1. The Olympic Village Boondoggle: According to Gary Mason, in today's Globe, the $40-50 million Vancouver taxpayers are now predicted to be on the hook for re Millennium's default on its loan from the city (and which last week City Hall claimed was down sharply from the predicted $150 million plus we were potentially looking at before the complex went into receivership and a rebranding campaign was launched to sell the remaining condos) is actually more like $230 million once the additional $180 million Millennium has failed to pay back for the land is factored into the equation. I realize the previous administration got us into this mess, but I agree with Mason (of whom I am not normally a fan, and who in general has been a rabid Olympics boosterer) that being less than fiscally honest with residents is repugnant.
All of this raises the question of why Olympic host cities are required to build such facilities in the first place--most always the biggest single expense, and generally leaving a morass of debt and recrimination after the event. Can't the athletes be put up in hotels, or billeted with families? Or erect temporary structures--tents, anyone?--that can be easily removed or converted into container-type social housing after the fact. Surely there has to be a better solution than burdening cities around the world with similar problem buildings on redeveloped land that will be difficult to flog in any market, let alone one following a global recession.
2. The Right to Protest: Word in today's paper that Robertson has asked that a proposed bylaw banning the erection of temporary structures as part of civic protests be revisited and reworked does little to reassure one that this administration hasn't in fact been taking direction from the Chinese government--and specifically on the matter of the Falun Gong protesters whose daily vigil outside the Chinese consulate on Granville Street the proposed bylaw seems expressly designed to target. What a spectacular abrogation of the basic principles of civic democracy! It's enough to make one want to reconsider CSIS Director Robert Fadden's remarks last year regarding Chinese influence over Canadian municipal elected officials.
3. Casinos: I am also not sanguine about today's announcement from Paragon, the BC Place developer that wants to build a major new casino adjacent the sports complex, that it has found a partner in Marriott for the hotel that is also to be part of the project. This is just the sort of 5-star endorsement that makes this Council start seeing dollar signs. Despite the overwhelming community--and police--opposition to the development, I predict that a negative vote next Tuesday is far from assured.
Instead of bread and circuses, why not think more creatively about arts and culture? After tentatively endorsing the Vancouver Art Gallery's move to Larwill Park, Council has been deafeningly silent on Bing Thom's inspired proposal for a new recital hall and performing arts complex at the VAG's current site.
4. Fireworks: More bread and circuses. A final item that caught my attention in today's press was word that the infernal Celebration of Light, the annual fireworks competition held very summer off English Bay, has been given new financial legs, thanks in part to money and in-kind sponsorships from the City. Why? Most West End residents hate the event; it provides license to homophobic louts from the suburbs to get drunk and go looking to bash some fags; and as far as I can see it's largely an empty and pointless spectacle.
Much like the past three years at City Hall.
P.
Posted by Peter Dickinson at 12:22 PM No comments:

Vancouver 125: Views from the Bridge 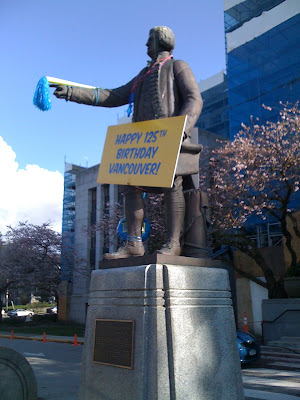 Yesterday officially marked the 125th anniversary of Vancouver's incorporation as a city. I celebrated by filing my taxes.
And by attending a PuSh Board Meeting. Which was only appropriate. Not because our meeting was held a stone's throw from Jack Poole Plaza, site of the permanently relocated prosthetic Olympic cauldron, and host yesterday to various bands and celebrations. Rather, spending time with my fellow Board members reviewing the success of this past year's Festival felt right on the city's birthday fête because we were the ones that got this whole party rolling back in January.
Speaking of rolling out Vancouver 125 art-related projects, the Digital Natives public art installation launched at the beginning of this week. Curated by Lorna Brown and Clint Burnham, the project broadcasts 10 second Twitter-length messages from invited artists and other contributors on the electronic billboard at the southwestern end of the Burrard Street Bridge. The messages cycle amongst the regular rotation of advertisements on the billboard, and many have been translated into First Nations languages. Members of the public are also invited to respond by tweeting their own messages to @diginativ; they will then be considered for broadcast on the billboard and/or for inclusion on the project's website.
Digital Natives runs until the end of this month.
P.
Posted by Peter Dickinson at 7:51 AM No comments: 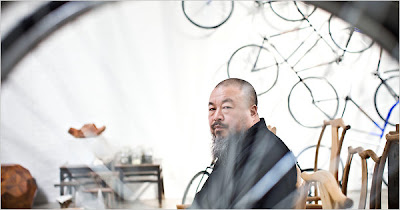 In a further sign that authorities in Beijing are determined the Arab spring will not spread to China, and that the Jasmine Revolution will be thwarted at all costs, one of the country's most high-profile artistic gadflies, Ai Weiwei, has been arrested. Police also apparently seized 30 computers from his home. Here's the story in The Guardian.
Meanwhile, The New York Times reports that a public art installation designed by Ai, and set to occupy the fountain outside the Plaza Hotel in Manhattan, will go ahead as scheduled--even if the artist is unable to be present.
I guess one always knew this would happen eventually, given Ai's outspokenness. Still, it was thought his significant international profile offered him a degree of immunity. With that no longer the case, it's now up to the international art community that has embraced Ai's work to put political pressure on Beijing.
P.
Posted by Peter Dickinson at 6:27 AM No comments: