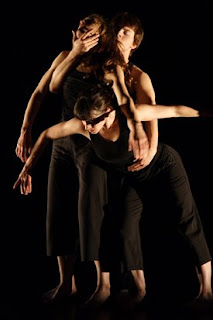 Yesterday Richard and I hiked it out to Burnaby’s Shadbolt Centre for the Arts to see Move: the company’s presentation of The Cell, a new full-length work that was being presented as part of the Vancouver International Dance Festival (which has been going on since the beginning of this month—although I’m embarrassed to say that this is the first event we’ve managed to get to). Move is presided over by Josh Beamish, the 21-year-old wunderkid of the Vancouver dance scene, who in addition to creating and touring his own work has collaborated extensively with other young local choreographers and dancers, including Simone Orlando and Amber Funk Barton. That collaborative impulse is in fact the raison d’être of The Cell, for which Beamish has solicited contributions from six co-choreographers (joining Orlando and Barton are Heather Dotto, Alison Denham, Crystal Wills, and Rachel Poirier), each of whom collaborates with Beamish on one of the piece’s seven movements (a solo created by Beamish with dancer Lara Barclay is credited as the seventh collaboration).

Some of those movements are more successful than others. Exploring the idea of physical confinement and containment, and drawing imagistic inspiration from the campy 2000 Jennifer Lopez sci-fi flick of the same name, The Cell begins with Beamish and Dotto’s exploration of dance mitosis. Two same-sex couples (one female, one male) appear in alternating soft spots, their extreme bodily attachment and small, shared gestures (a raised hand that is met, weight that is distributed equally front to back, steps made so as to minimize the risks of separation) gradually giving way to the inevitable and painful splitting of each pair. A promising beginning, to be sure, with composer Kristopher Fulton’s appropriately symbiotic soundscape contributing to the overall effect (although a technical glitch right at the start with the tape resulted in an unscheduled blackout while the problem was fixed and the dancers began again from the top). However, I was frustrated by the lighting design for this sequence. If you’re going to divide the spectator’s attention on stage, then at least do so in a way that compels us to make an informed choice as to where to look. Spots alternated between each couple, but when the lights were down on one this didn’t mean they stopped dancing. This made one strain to see what was going on with the unlit couple when, logically, one should have been paying attention to what was happening with the lit couple. I get that this gets at nucleic processes themselves being invisible to the naked eye, but it was nevertheless too much of a tease for those of us who were hungry to see the no doubt complex bits of co-dependent dance that were actually being performed in semi-darkness.

I remained mostly under-nourished through the next two movements, as Beamish and Denham’s collaboration took the form of a dance film shot and edited by David Raymond, and as Beamish and Poirier’s collaboration, while having the virtue of filling the stage with live, moving bodies, felt to me to be overly burdened with theatrical busyness (flared condom-like costumes, a pair of shared boots, and a suspension cable that bore aloft dancer Tiffany Tregarthen). It took Barton, living up as always to her middle name, to jolt the audience with some pure dance adrenaline by choreographing with Beamish a go-go-style ensemble sequence around and upon the Shadbolt Studio Theatre’s rafters that had audience members literally twisting in our seats. I enjoyed as well the precision of Beamish and Wills’ collaboration, which included a spectacular pas de deux (at once aerial and grounded) that made better use of that suspension cable, as well as a coffin-like white box. Beamish’s solo for Barclay likewise allowed us to revel at length in some virtuosic displays of technique, Barclay’s tall, lithe frame well suited to the various extensions and floor work Beamish tasked her with executing.

But it was the final collaboration, between Beamish and Orlando, that really took my breath away. Featuring the entire company (minus the younger apprentice performers who were employed in some of the other movements), and choreographed around a square of white light whose borders the dancers would variously broach, this sequence brought us back to the themes of separation and attachment, and also served as a something of a self-reflexive comment on the whole collaborative process behind the creation of The Cell. We are each other’s mitochondria, the enzymes that fuel creative metabolism. But we still have small compartments within ourselves that are not as porous, places where we utterly and completely alone.