Seeing and Being Seen at the Olympics: Going Digital in Vancouver and Beijing

Surfing the mass of bodies downtown yesterday, I was pleasantly surprised to discover that, along with, Cue, the Vancouver Art Gallery's rotating program of videos being displayed outdoors on a giant screen in front of the gallery's south facade... 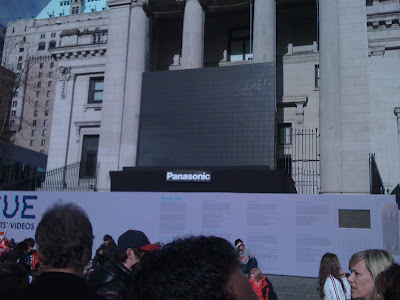 ... some of the more adventurous visual arts programming around the Olympics is taking place in around Library Square. This includes outdoor installations overseen by the City of Vancouver's public art program, such as Ron Terada's brilliant "The Words Don't Fit the Picture," on the south plaza of the library: 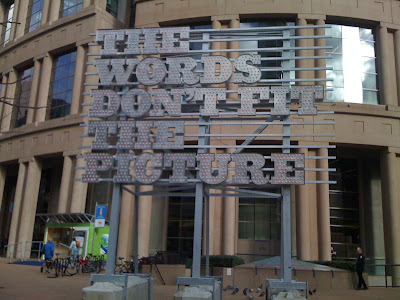 Inside, the Library is playing host to the third of the 2010 Cultural Olympiad's CODE Live sites, which are showcasing digital artworks, including in this case the interactive installation "Room to Make Your Peace 2010." This collaborative work, which has been given official patronage by none other than Her Excellency, the Governor-General, involves people writing messages of peace on scraps of paper that they then craft into origami-like cones; the cones are then affixed with an LED light and sent up a pressurized air duct, shooting high into the air, before landing on a giant net strung across the Library atrium: 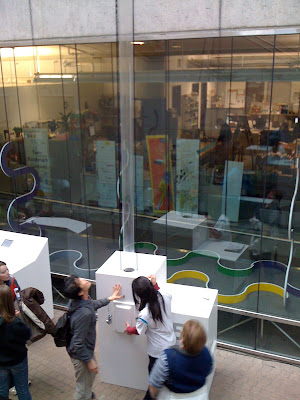 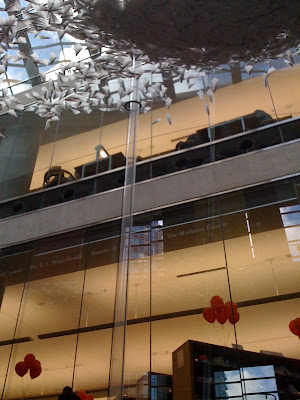 Even more pleasing to me, however, was the discovery of "Seen," a new work by Toronto-based digital artist David Rokeby: 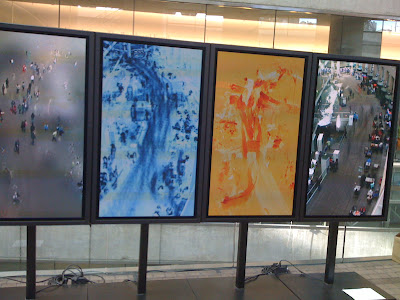 Operating on the same principle as X-Rays, or infrared surveillance technology, Rokeby's work uses a hidden live camera to capture pedestrians' movements in the Library atrium, feeding the recorded images back through time-delay onto the four screens seen in the image above. In this way, Rokeby reveals to us, in a very de Certeau-like manner, the traces of our own unconscious movements and, as importantly, our interactions (and avoidances) with others.
Coincidentally, I had first come across Rokeby's work when I was in Beijing in the summer of 2008, doing research in advance of the Beijing Olympics, and attended one afternoon a groundbreaking show of international new media art curated by Zhang Ga at Beijing’s National Art Museum of China. Called Synthetic Times, and playing off BOCOG’s dedicated themes of "Hi-Tech Olympics" and "People’s Olympics," the show placed multi-media works by Chinese artists like Du Zhenjun, Xu Zhongmin, Xu Bing, Wu Juehui, and Miao Xiaochun alongside challenging and frequently interactive sound, video, digital, robotic, and computer installations, projections, sculptures, and immersive environments created by such international art world luminaries as Stelarc, Christoph Hildebrand, Edwin van der Heide, Anthony McCall, Jean-Michel Bruyère, and Mariana Rondon. Works were grouped according to four organising themes: "Beyond Body" explored technological extensions of the physical body, testing the limits of subjectivity through bio-mediation; "Emotive Digital" examined the ways in which machines and related electronic devices are becoming responsive creatures; "Recombinant Reality" sought to break down old Cartesian dualisms through mixed, virtual, and acoustic environments; and, finally, "Here, There and Everywhere" focused on how the internet, especially, functions as a kind of "planetary membrane."

In this last category, I was especially gripped by Rokeby’s "surveillance installation," "Taken." A split-screen dual projection, Rokeby’s piece uses infrared video cameras to capture and record in real-time the movements of gallery goers; these are then projected onto the orange, right hand side of the screen in overlapping twenty-second loops, a computer-generated, panoptical emplotment of all human activity in the room that is at once synchronous and sequential, as in the manner of most closed-circuit television monitors. Every now and then white boxes frame the heads of individual visitors; when this happens, the blue, left-hand side of the screen displays the faces of those singled out in close-up, adding randomly-generated text to suggest their possible states of mind while under observation ("nervous," "carried away," "hungry," "complicit"). These close-ups are in turn arranged as black and white thumbnails of the last 200 visitors to the room, and displayed at regular intervals, a taxonomy of our own self-monitoring.
And if, as curator Zhang claims in her introduction to the catalogue accompanying the show, a "new taxonomy" of the human needs to be written, then surely what Rokeby’s work suggests is that--again to quote Zhang--"the role of art is to ensure that the deliberation takes place not behind closed doors but in the recombinant arena of open space." As Zhang’s choice of sporting metaphor implies, the Olympics have provided an impetus to initiate such a dialogue in China at the same time as they have given the state an excuse to increase security and surveillance, including conscripting local citizens as part of reconstituted, Mao-era neighbourhood committees.
Not that Vancouver is exempt from such self-surveillance--and the urban paranoia it can engender--a fact I was reminded of yesterday when I got off the Canada Line at Broadway and Cambie after my foray downtown and looked up at the CCTV cameras looking down at me: 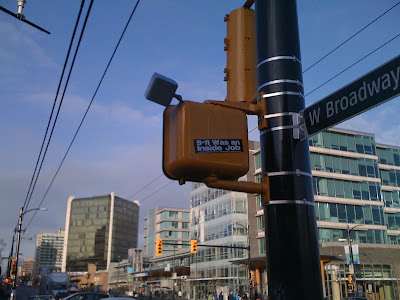