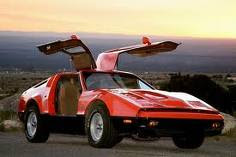 Harry Somers' brilliant Louis Riel notwithstanding, I've always thought the Canadian politician who would make the best subject for an opera was New Brunswick Premier Richard Hatfield. The outsized ego, the New York City rentboys, the marijuana in the luggage, the public spats with Pierre: it's all there.
I admit to being somewhat biased. My Dad was born in the same small town as Hatfield: Hartland, N.B., home of the longest covered bridge in the world. That fact alone could inspire infinite arias, not to mention a potentially amazing set design.
Well, if we have to wait a while longer for the definitive Hatfield opera, we can at least console ourselves with the fact that at least there's now a Hatfield musical. Or at least a musical in which Hatfield plays a key role.
I'm referring to Bricklin, a new work by Allen Cole and Paul Ledoux about the futuristic 1970s car (it of the gull-winged opening doors fame) designed by US entrepreneur Malcolm Bricklin that he somehow convinced Hatfield to sink tens of millions of New Brunswick taxpayers' dollars into, and that went bust soon after it was first unveiled in 1975. According to an article in today's Globe, the musical--subtitled "An Automotive Fantasy"--is apparently playing to full houses at the Fredericton Playhouse in a co-production with Theatre New Brunswick directed by the very talented Alisa Palmer (whom until now I did not know was a fellow Maritimer).
I remember once getting a glimpse of the Bricklin at a science and technology museum in Ottawa, and my Dad telling us the story of its production, likening its failure to a Canadian industrial tragedy as disastrous as that of the Avro Arrow. I didn't really know what he was talking about at the time, and I wasn't much interested (as boys my age were meant to be) in cars anyway, but I do remember thinking those flying buttress car doors were pretty cool.
I'm still not much into cars. But I do love musicals. And, though I never met the man, I can't help thinking that Hatfield and I, two sisters with deep Hartland roots, share a spiritual connection of some sort. Here's hoping the show becomes a bona fide New Brunswick hit in a manner much more wickedly camp than PEI's Anne: The Musical!
That would definitely be something worth going home (and homo) for.
P.
Posted by Peter Dickinson at 4:25 PM