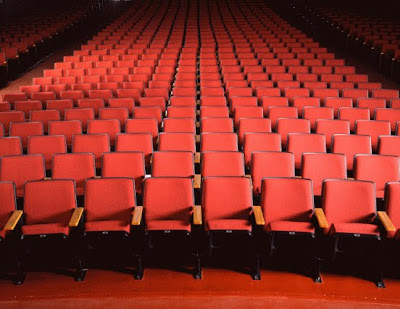 So, it's been just over a week since Objecthood closed, and I guess I'm slowly coming to grips with the fact that it's over.
The post-show melancholy remains, reinforced this past Friday when I was at SFU Woodward's for Contemporary Arts' Open House (continuing today, though without performances; details here) and took a visiting friend to see Studio T, the space in which our piece ran. The lights and set (such as it was) had been struck, of course. But what really got me was that the rather luxurious and plush chairs that had filled the risers for our audiences had been replaced by cheaper folding metal ones.
I saw later that ours had been moved into the bigger Fei and Milton Wong Theatre, which was hosting the mainstage Open House performances that night. Still, it made me feel a little sad.
Not that it wasn't a great run: enthusiastic audiences, performances by Justin and Vic that just got better and better, a crew that faced every challenge with professional aplomb, and, heck, we even made some money. It would have been nice to get a review, but the email responses from friends and colleagues have been so gratifying. And it was great to talk through the process with Don and Rob K last Wednesday in front of Henry Daniel's class, who had all seen the show, and had some really smart responses to it.
One consequence of all this is that I'm completely behind in my own theatre-going. I saw nothing at the Fringe, and have yet to get to The Electric Company's Tear the Curtain. We're going to Park: The Musical at Studio 58 next Friday. I plan to get there early so we can get a good seat.
P.
Posted by Peter Dickinson at 10:34 AM

Email ThisBlogThis!Share to TwitterShare to FacebookShare to Pinterest
Labels: SFU School for the Contemporary Arts, SFU Woodward's, The Objecthood of Chairs