We've been talking a lot about the importance of incongruity as a structuring principle of comedy in one of my classes this summer. Here are a few of the political incongruities that gave me a chuckle this past weekend: 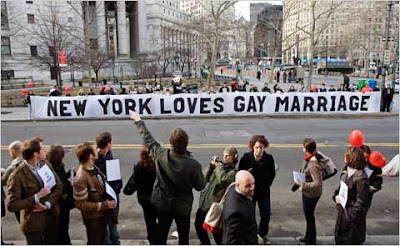 1. Just in time for the 42nd edition of New York City's Pride Parade yesterday (at which a chastened Tracy Morgan served as honorary marshall--kidding!), Governor Cuomo signed a bill on Friday making New York the sixth state in the US (plus the District of Columbia) legalizing same-sex marriage. As the lead article in Sunday's New York Times pointed out, "the biggest and most influential donors to the New York campaign were Republicans." But as the paper's former restaurant critic Frank Bruni put it elsewhere in a very personal (and movingly written) op-ed piece--with what I take to be only the slightest whiff of irony--perhaps the greater incongruity is that this is a victory that the LGBT community is celebrating in the first place: "Why such widespread backing, from such surprising quarters? One major reason is that the wish and push to be married cast gay men and lesbians in the most benign, conservative light imaginable, not as enemies of tradition but as aspirants to it. In the quest for integration and validation, saying “I do” to “I do” is much more effective — not to mention more reflective of the way most gay people live — than strutting in leather on a parade float. We’re not trying to undermine the institution of marriage, a task ably handled by the likes of Tiger Woods, Arnold Schwarzenegger, John Edwards and too many other onetime role models to mention. We’re paying it an enormous compliment." 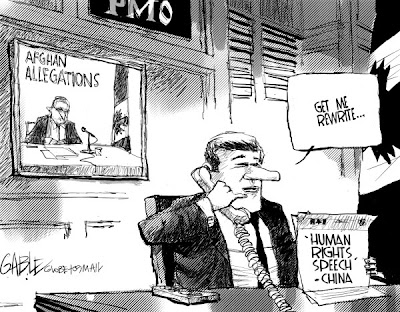 2. Meanwhile, here at home, after nearly a year investigating across party lines allegations of Canadian troops' complicity in detainee torture in Afghanistan, Stephen Harper's government has released thousands more pages of transcripts. Once again, most of the information on those pages is blacked out. Word is that some of it has to do with asbestos being used to build the prisons where the alleged torture took place. 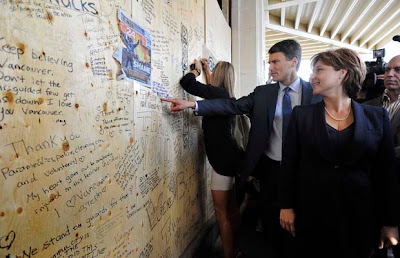 3. In Saturday's Globe and Mail, Mayor Gregor Robertson admitted that he didn't know how many police were on the streets the night of the the Stanley Cup riots, and that Police Chief Jim Chu wouldn't tell him. Apparently last year's release of the same information was a "mistake" and that as Chair of the Police Board, the mayor has no input into operations, only for "police and budget." But wouldn't both of those things--personnel and money--fall into the category of operations in most organizations? At least Robertson agrees with Premier Clark that those responsible for the worst of the mayhem should be duly punished. As the above photo details, they are starting with bad spellers.
P.
Posted by Peter Dickinson at 5:50 AM