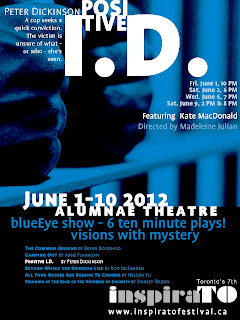 The folks at the InspiraTO Festival, where my short 10-minute play Positive I.D. is premiering in Toronto at the Alumnae Theatre next month, sent along this very cool poster image yesterday. They encouraged us to attach it to any blog or facebook posts or tweets that we might make in the coming weeks to publicize our work and the Festival as a whole. I'm always of two minds in talking about my work, but I'll do anything for an audience. So I'm reprinting here what I posted to InspiraTO's own facebook page just a few minutes ago:

The idea for Positive I.D. came to me after watching one too many CSI episodes. Police procedurals are a staple of television and the movies. But they are also among the most generically constrained of entertainment forms. There is one basic plot (crime, investigation, arrest), and most shows follow this standard arc. There is also little variation among the characters, especially characters of colour (with The Wire being an important exception). This idea of being locked into a role struck me as worthy of exploration on the stage, which is all about playing one’s part. Hence the challenge I set myself in writing this play: in the space of ten minutes introduce the audience to three stock characters (a cop, a victim, an accused); somehow add nuance to our understanding of them via their charged encounters with each other; but also show how, in the end, they (and maybe we) are unable to see and move beyond the limits of the role assigned to them. We’ll see how well I’ve done when the Festival opens. I’ll be there on the 2nd, with lots of family in tow (having already warned them about the dialogue being mostly profanity). In the meantime, I wish Madeleine and Kate and the rest of the cast all the best for the rehearsals. Break a leg everyone!

Thank you for the fantastic article. The place else could anyone get that kind of info in such a perfect means of writing? I have a presentation next week, and I am at the search for such information.