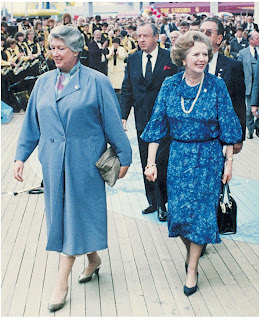 Amid all the theatricality and performances of protest attending news of Margaret Thatcher's death in the UK (favourite graffito courtesy of our London friend, Cathy: "The Iron Lady: May She Rust in Peace"), a reminder, via the adjacent photo and accompanying story in the Vancouver Sun, of an important local connection to the neoliberal legacy of Thatcher's neoconservative politics: real estate.

Just as, soon after taking power, Thatcher authorized the private sale of huge swathes of council housing in London, so did BC's Social Credit government, in the wake of Expo 86, eagerly offload much of Vancouver's False Creek North to LeeKa-Shing's Concord Pacific, paving the way (quite literally) for the city's downtown boom in luxury condo development.

In both cases, the short term effect may have been to encourage middle class families to stay in the city rather than flee to the suburbs, and to stimulate economic growth and population density in hitherto depressed or formerly industrial neighbourhoods (though the density issue is debatable in the case of Vancouver, given that so many condo units have off-shore owners who don't live in them); however, in the longer term, it has meant pricing that same class out of the market while at the same time shrinking the amount of available--and affordable--low-income and social housing to ever smaller levels.

Needless to say, that's a narrative we don't hear much about in Pat Carney's reminiscences of Maggie's stamina and their mutual admiration as determined female deregulators having to deal with weak and "wet" male colleagues. Nor, unsurprisingly, is there any discussion of their unfortunate fashion choices.

The 1980s were horrible in so many ways.

Posted by Peter Dickinson at 4:34 PM