On this, our first full day in New York, Richard and I decided to walk up to MOMA from our midtown hotel to take in the Isa Genzken retrospective. One of Germany's preeminent postwar artists, Genzken works across a range of media, including painting, photography, sculpture, film, and mixed-media assemblage. We had first encountered her work at the Whitechapel Gallery in London in 2009, which I wrote about here. This time around, seeing the full arc of Genzken's career, one understands how crucial space is as a concept in the artist's work: from her early interest in acoustic space (radio antennae stuck in blocks of concrete, geometric sound waves beautifully carved from wood, photographs of ears) to her stunning late career installation-cum-assemblages, which at once repurpose the detritus of consumer culture (see image below) and continue her longstanding architectural referencing of the built environment to comment on post-9/11 politics. 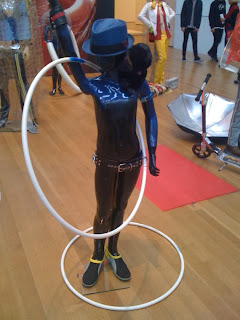 Also on view in the second-floor atrium is an immersive film installation by Isaac Julien called Ten Thousand Waves. Projected onto nine double-sided screens, the 55-minute piece stars, in one of its sequences, the Chinese film star Maggie Cheung as the sea goddess Mazu, leading lost fishermen to safety in a retelling of the 16th-century "Tale of Yishan Island"--a reference, in this case, to the 20 Chinese migrant workers drowned in a flood off the coast of northwest England in 2004. Another section, mixing images of modern-day and old Shanghai, and this time focusing on actress Zhao Tao, is a riff on a classic film from the 1930s called The Goddess. Accompanied by a rich soundscape, the work is mesmerizing and represents a spectacular return to form for the British artist.

Finally, there was also a small but brilliant exhibition called There Will Never Be Silence, the focus of which was MOMA's recent acquisition of the score for John Cage's iconic 4'33''. Around this, the curators showcase a range of different conceptual, minimalist, and Fluxus artists who were influenced by Cage or were, like him, working across media to challenge notions of space, time, materiality, and objecthood. These include Kurt Schwitters, Robert Rauschenberg, Robert Morris, Lawrence Weiner, and Yoko Ono, among others. The show, in its tracing of artistic influence, also reminded me of another London exhibition, this one the recent Barbican show on "The Bride and the Bachelors," which explored the ongoing engagements with Marcel Duchamp and his work made by Cage, Merce Cunningham, Rauschenberg, and Jasper Johns, and about which I also wrote here.

No photography was permitted in the Cage show at MOMA, but no such interdiction was in force in their upstairs modernist galleries. And so I close this post with the following inter-artistic reference, which represents my second encounter in six months with a version of Duchamp's first--and, to my mind, most important--ready-made: 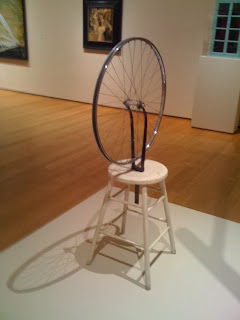 Posted by Peter Dickinson at 2:12 PM