This afternoon I finally made it onto "Deadhead," the large-scale sculpture-cum-installation mounted onto a WW II-era barge and anchored since June in Heritage Harbour, near the Vancouver Maritime Museum in Kits Point. Created by artist Cedric Bomford, in collaboration with his father Jim (a retired engineer), and his brother Nathan (an artist and builder), "Deadhead" is the third and final work in Other Sights for Artists' Projects' "When the Hosts Come Home" series, an ambitious multi-year initiative overseen and curated by Barbara Cole that took seriously the so-called legacy of model sustainability pitched as part of the post-Olympics development of South False Creek. More specifically, Barbara invited three artist teams "whose practices incorporate the use of recycled and refurbished materials to create temporary site specific sculptural works" that would promote moments of social interaction and public agency.

The first work in the series was T&T's "False Creek," a temporary installation that for three weeks during the 2010 Olympics transformed the main concourse of the HSBC's downtown headquarters into a post-apocalyptic green heterotopia. Later that summer Köbberling and Kaltwasser's "The Games are Open" was installed in the undeveloped and fenced-in city-owned lands to the west of Athletes Village.  A larger-than-life bulldozer composed of wheat board reclaimed from the Village development as it was being transformed from temporary sporting dormitories to luxury condominiums for sale, the sculpture has, as Barbara writes on Other Sights' website (and as she talked about at greater length as part of a presentation at the conference on Art in Cities after Mega-Events that I co-organized two weekends ago), "shifted from sculp­ture, to gar­den, to dirt pile, each trans­for­ma­tion dri­ven by the agen­das of assumed own­ers." As many of us saw during Barbara and Lorna Brown and Vanessa Kwan's art amble as part of the Mega-Events conference, the remains of "The Games are Open" are currently being cared for by "rogue gardener" Eklas, who is in a fight with the city for access to water to maintain her truly beautiful plantings.

And, finally, there is "Deadhead," built from a stockpile of salvaged wood and other reclaimed materials into "an imaginative assemblage of sentry posts, guard houses, lookouts and observation platforms" that are "connected by swooping walls and spiraling stairs and ramps." Over various weekends in June, July and August, the Bomfords have hoisted an orange flag on their floating sculpture, indicating that it is open for boarding and exploration by the public, with free ferry service from the dock in Heritage Harbour. Various workshops and concerts and other events have also been hosted on the barge, and one can see how the work's jungle-gym-like construction would be a hit with the kids (several of whom were about today).

However, what was most striking to me were the uncanny perspectival shifts that the work occasioned in my field of vision. Seen from ashore, and in approach via the tiny ferry boat, "Deadhead's" various structural components and different vertical peaks and hybrid surface materials seemed at once of a piece with and totally disruptive of the built skyline of downtown Vancouver and the West End against which it is cast (with the corrugated tin around the spiral lookout tower especially alluding in an ironic way to the glass and steel condo towers for which the city has become known). 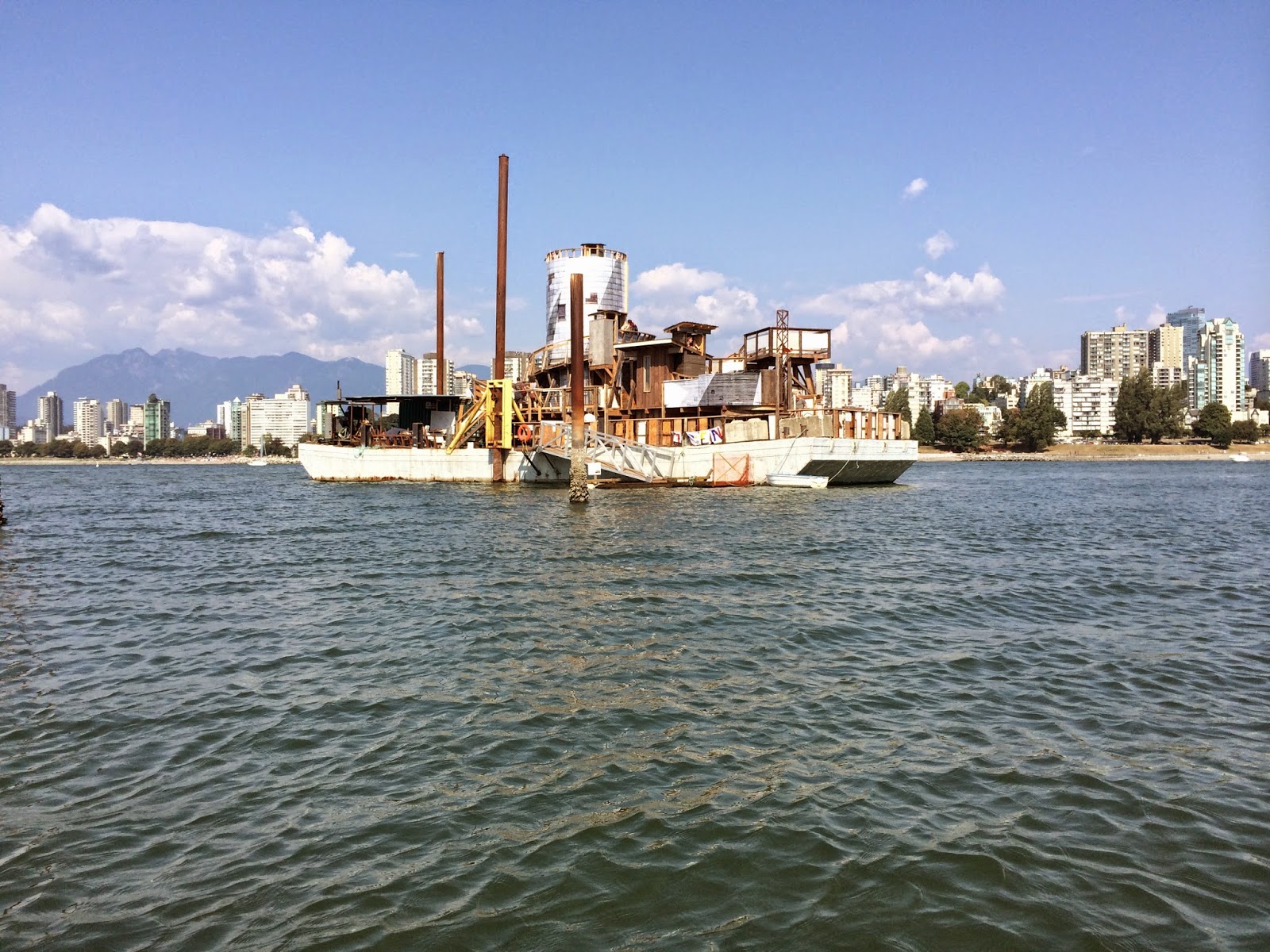 At the same time, from on board the ship, looking westward one cannot help but notice the huge tankers and cargo container ships that blot the horizon and bloat the waters of English Bay--a very different kind of visual economy, to be sure. And one that fits, more generally, with my theory of the Vancouver sublime. 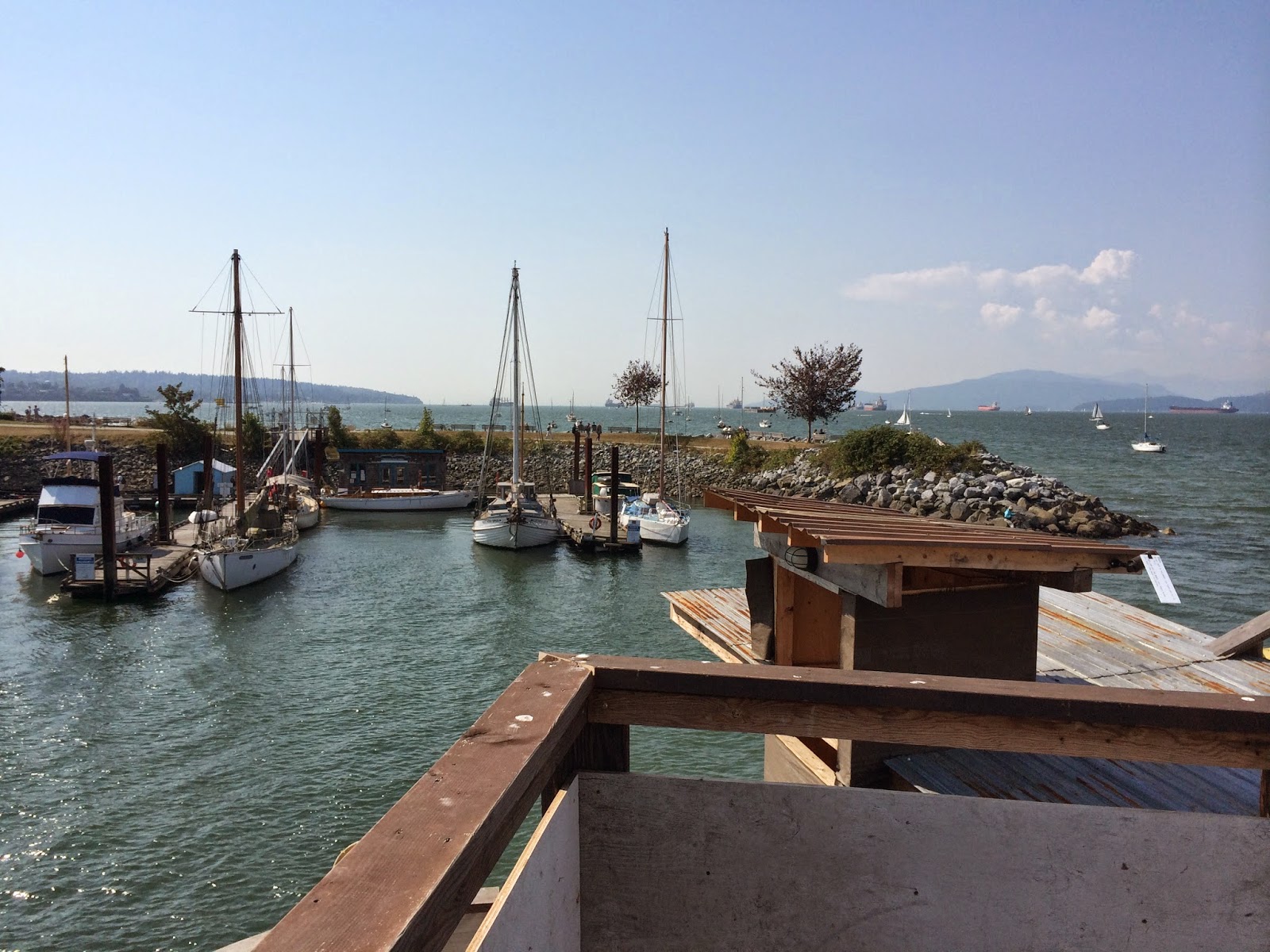 On a gorgeous summer's day, staring out at picture-perfect mountains and sea, one's field of vision should be disturbed in such a way. That is what great art does and "Deadhead," like all the works in "When the Hosts Come Home," will haunt my imagination for some time to come.