Judith Thompson Turns Up the Volume on Iraq 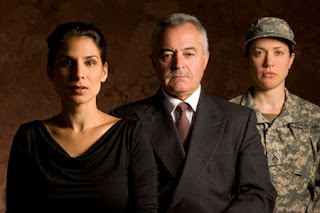 Interesting—and chilling—to note how, in the eight years since 9/11, the ongoing “war on terror” has steadily moved from front-line news to Orwellian background noise, sometimes louder (as when another roadside bomb explodes), but mostly a mid-range hum. As in 1984, the wars in Iraq and Afghanistan have simply been absorbed as part of the daily fabric of our lives, their “urgency” and “priority” having long since been supplanted by more pressing (and proximate) concerns—most recently, the economy. Most Canadians, I bet, would be hard pressed to come up with the current figure of our combat casualties in Kandahar (118 at last count, the most recent being Major Michelle Mendes’ apparent suicide).

As Barack Obama prepares to implement his plan for the withdrawal of US troops from Iraq, Judith Thompson brilliantly reminds us in her most recent play, Palace of the End (shortlisted for the 2008 Governor-General’s Award for Drama and winner of the 2007 Susan Smith Blackburn Prize), of the sedimented layers of history, ethnic and religious conflict, national self-interest and personal exculpation, that accrued between the first Gulf War and the invasion of 2003. The play, which is running at the Performing Arts Lodge on Cardero Street until Sunday in a Touchstone, Felix Culpa, and Horseshoes and Hand Grenades co-production, is structured as three monologues that move backwards in time, and that are delivered by fictionalized versions of three real-life “casualties” (albeit in very different senses) of the Iraqi conflict, people whom we might now consider “bit players” in the larger scheme of things, more collateral damage, but that for a moment at any rate were the very real face of war’s grievous atrocities, and multiple victims. Though they are not explicitly named as such, the monologues are spoken in turn by stand-ins for Private Lynndie England (Alexa Divine), the most public fall-person for the prisoner abuse at Abu Ghraib (she of the smiling, thumbs-up pose standing over the pile of naked Iraqi prisoners); David Kelley (Russell Roberts), the British weapons inspector who amid the publicity surrounding the leaking by the media of his report finding no evidence of WMDs in Iraq, and the suggestions of a government cover-up, committed suicide; and Nehrjas al-Saffarh (a terrific Laara Sadiq), a Communist dissident in Iraq, who along with members of her family, was tortured and killed by Saddam Hussein’s Ba’athist Regime in the lead-up to the First Gulf War.

Thompson is careful not to make too-simple political and personal connections between the three characters and their stories (though each does remain on stage during the others’ monologues), nor to sit in judgment of one or over-empathize with another. Rather, in imagining inner lives for three individuals who have been, to borrow from one astute commentator on the play, abstracted as “documentary ciphers” in the larger narrative of the Iraq War, Thompson is challenging us in the audience to make those difficult connections, to ask why we should care about these individuals and what they have lost, to turn up the volume a little on Iraq.

I am reminded, in this regard, of a recent article by Laura Levin that I read on Thompson’s “environmental aesthetic” (in Theatre Research in Canada 24.1-2 [2003]). Levin notes that in the heightened, or poetic, naturalism of Thompson’s best-known plays—Sled, I Am Yours, The Crackwalker, Lion in the Streets—a hyper-localism, or over-saturation, of place-based detail creates a porousness between the bodies of her characters and their external worlds (be they natural, commercial, or social). This “spatial dependency,” as Levin calls it, in turn opens up, by reversing figure and ground, the possibility for a radical ethics of contingent connection, in which individuals do not exist separately from or in “antagonistic relation” to each other, but rather as “sensuously linked to the bodies of [their] neighbours.” Structurally and formally, Palace of the End is something of a departure from Thompson’s earlier work. However, in that key detail of keeping each monologuist on stage throughout the play, and in her characteristically rich embroiderings of place in those monologues (even places as notoriously dark as those of Abu Ghraib and the torture “palace” of Saddam that gives the play its title), Thompson likewise shows us the ethical claims that Iraq—no matter how physically or politically distant it may seem—continues to make upon us.
P.

Posted by Peter Dickinson at 8:29 AM