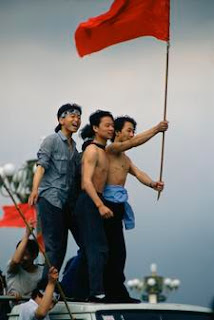 Students protesting in Tiananmen Square, May 1989 (the photo accompanies the account by Elizabeth Pisani in Granta 105 discussed below). Tourists and citizens strolling through Tiananmen Square, June 2008 (from my trip to Beijing last year in advance of the Summer Olympics).
Amid the decidedly low-volume reporting on the 20th anniversary of the Tiananmen Square massacre yesterday, I was struck by Elizabeth Pisani's reflections on her witnessing of the events of June 3-4, 1989 in a recent issue of Granta ("Chinese Whispers," Granta 105 [Lost and Found]). Pisani was a young reporter for Reuters, who together with her colleague Graham Earnshaw, filed some of the first dispatches on the tanks (or Armoured Personnel Carriers, as she quickly learned to distinguish them) rolling into the square--and over the bodies of the students occupying it.
What makes Pisani's account so interesting is her attempt to come to grips with the differences between her personal recollections of the events (and her participating in them) twenty years hence, those posted to the Internet by Earnshaw in his own published memoir in 2001, and the record Pisani committed to paper in 1989 partly as an exorcism and partly as a guard against memorial contradiction (the whole issue is devoted to memory). The "Early Record," as Pisani labels it, by and large accords with her subsequent dinner-table retellings of the events (the "Late Record"), but with some noticeable discrepancies regarding where she had thought she and Graham were when the tanks rolled in, and what she felt when she saw those tanks. To the Late Record, it soon becomes clear to her, she has added embellishments that she can only have acquired from elsewhere (other published reports and images, etc.). As Pisani notes, "my presence in Tiananmen Square when the troops started moving across it is fundamental to my identity" (86). But, as she also goes on to ask, "Can I claim as my own the feelings, images, thoughts that I have sucked back in from the collective memory? Do I become a different person as my memory changes, or do I change my memories because I am becoming a different person?" (87).
In the 20 years since June 4, 1989, when not just China but also Western countries clamouring to do business with its booming economy have done their best to erase from the historical record the events of that night, Pisani's questions take on added urgency. Indeed, there is a way in which we would be better served in claiming more of the collective memory of Tiananmen as our own.
P.
Posted by Peter Dickinson at 7:45 AM

I thought you might like to see a memorial for Tiananmen Square that people made with their own dancing bodies in cities around the world.

There are some traces online:

This London online-TV coverage has beautiful footage of some of the 70 people who made the memorial in Sydney:

These people in Brussels are part of Amnesty:
http://www.youtube.com/watch?v=FdGQJnBgC1k

But these completely unrelated other people in Brussels are not:
http://www.youtube.com/watch?v=TQ3hNopi9IU

Some people making the dancing vigil in Bristol:
http://www.youtube.com/watch?v=i569iMX7cBc

On stage in Philadelphia:
http://www.philly.com/inquirer/magazine/48139587.html

and then there are these people in Athens making a... rockstar version:
http://www.youtube.com/watch?v=k4At4RlvjJ0