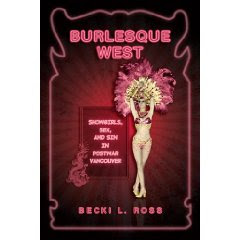 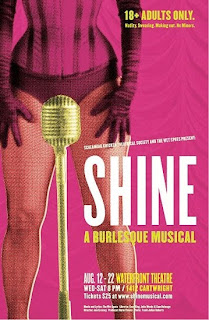 According to my friend and former colleague at UBC, Becki Ross, Vancouver used to be the bustling capital of a burlesque circuit that saw performers tour venues from San Francisco to the Yukon, and that greased the economic engines of this city from the 1950s to the mid-1970s. Becki details this history in a new book, just published by University of Toronto Press, and from which I have taken my title for this blog post.
Vancouver is also now a thriving centre for the neo-burlesque scene, which has exploded throughout North America as women of all shapes, sizes, ages, sexualities, and races have started reviving the traditions of classic burlesque. Local performer and choreographer Melody Mangler, for example, recently captured first place in a major burlesque competition that took place in Las Vegas (apparently live butterflies flew out of her corset when she opened it).

Mangler is a member of the Screaming Chicken Theatrical Society, a company primarily (though not exclusively) devoted to burlesque entertainment. The Chickens have recently collaborated with Cass King and John Woods of The Wet Spots (our local, hetero—though no less raunchy—version of New York cabaret duo Kiki and Herb) to produce Shine: A Burlesque Musical, which is currently playing at the Waterfront Theatre on Granville Island until the end of this month. That fact alone—that an X-Rated show about tittie tassles and g-strings is playing family-friendly Granville Island—tells you something about the recent mainstreaming of burlesque. Whether that mainstreaming is enough to sustain a whole musical is another matter.

As my friend Joanna, who accompanied me to a performance of Shine last Thursday, has noted, the very form of burlesque—arising as it did out of vaudeville, minstrelsy, and sketch comedy—seems to be antithetical to a traditional book musical. And, indeed, the weak link in Shine is primarily the narrative through-line. It centers mainly on King’s Shine Mionne, the boozy and bewigged proprietress of The Aristocrat, a down-on-its-heel nightclub whose burlesque glory days are behind it, and which is now being squeezed by gentrifying impulses from all sides (it doesn’t help that Shine has also lost much of her money in bad stock investments). Enter Richard Suit (Michael Smith), who convinces Shine he can restore The Aristocrat to its former glory if she takes him on as producer, and if she agrees to tone down some of the racier bits of her show in order to target a more Broadway-style audience (one of many meta-references to musicals throughout the show). Unfortunately, this plan involves ditching The Aristocrat’s large and lusty reigning diva, Lulu Van Doozy (a full-throated Noelle Pion), in favour of someone more conventionally “pretty”—someone like Grace Anderson (a superb Gemma Isaac), a graduate student from Emily Carr who has come to The Aristocrat to write a thesis about burlesque and gender performativity, but who finds herself being conscripted as part of Shine and Suit’s dueling visions for the new show. To this end, a particularly hilarious set piece involves Grace and the just-arrived would-be actor from the prairies, Frankie Avid (Teddy Smooth), first performing a romantic love duet, as written and choreographed by Suit, and then repeating the number in Shine’s rewritten, and suitably more vulgar, version.

Moments such as these are well worth the price of admission, and Isaac, in particular, is a delightful and charismatic performer. But not everyone in the cast has her acting chops; nor does everyone match the vocal power and range of Pion and King. The musical, which is admittedly still evolving (it started as a one-off, three-song contribution to last year’s Vancouver International Burlesque Festival called By the Seat of Our Panties), is also somewhat schizophrenic in terms of its content and target audience references; that is, while there are lots of local references to charm Vancouverites (The Aristocratic just happens to sit between a Starbucks and a Cactus Club, for example, mirroring the fate of the old Aristocratic Diner at the corner of Broadway and Granville, whose neon sign now sits in the window of the big-box Chapters store that took its place), it also crams in as many New York geographical and cultural references as possible (the creators have made no secret of their desire to make it into the New York Fringe Festival, and maybe even all the way to Broadway).

Then, too, to go back to Joanna’s comment, the strengths of burlesque may just not be adaptable to the Broadway-style musical. The best moments of the show are the dance routines themselves, which highlight the superb choreographic talents of Mangler and April O’Peel, and which showcase the outstanding burlesque dance talents of the show’s chorus (Keri Horton as Feral is a particular standout). And it is here, as with traditional burlesque, that the audience most vocally demonstrates its appreciation.

Hi, Peter! Thanks so much for your thoughtful review. And BIG THANKS for the Kiki and Herb comparison, we're huge fans! Just wanted to clarify one little factoid - the Wet Spots are decidedly not hetero. We're "Canada's premier bisexual polyamorous husband-and-wife musical sex comedy duo" ;) Cheers, and thanks again!

Right you are, Cass. My bad. For the record, folks, The Wet Spots are the queerest musical sex comedy duo around. And Shine is definitely the most polymorphously perverse musical I've see since Hedwig. Go see it!