So we didn't get to any Festival de Otoño en Primavera performances while in Madrid after all. We were too busy gallery and museum hopping, the highlight being the superb collection housed in the Prado. During a survey of every room of the museum (something I rarely do), I returned three times to Las Meninas, which true to the complexity of Velasquez's vision really does merit repeated--and intense--scrutiny. But for the crowds of tour groups and school children clustered around it this would be easier done than said.
Following upon my last post, where I mentioned seeing Picasso's take on Velasquez's most famous painting in Barcelona, we were pleased to discover that in a gallery in the new extension to the Prado there was a special exhibition of the British pop artist Richard Hamilton's preparatory sketches and proofs for his own take on Picasso's take on Velasquez (commissioned on the occasion of Pablo's 90th birthday).
Here's Velasquez's original: 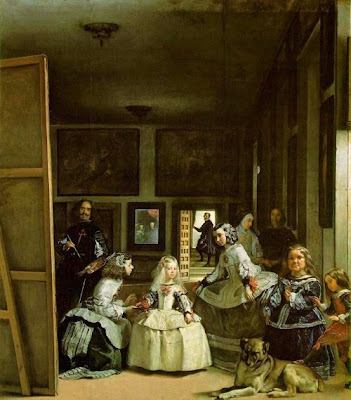 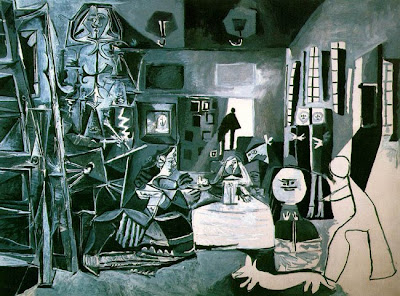 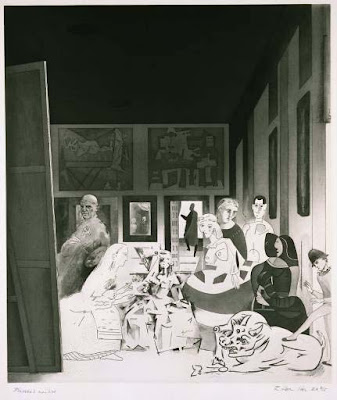 Among other things, it's interesting to note in Hamilton's version his cubist representation of the Infanta, as well as his transformation of the dog in the foreground into a Picasso-like bull. In the bookshop, Richard picked up a handsomely printed catalogue with a lead essay that seeks to explain this transformation of the dog into a bull via Hamilton's pioneering experiments in pop art, arguing most provocatively that Hamilton's famous "Just what is it that makes today's homes so different, so appealing" (see below) is in fact itself a take on Las Meninas: Having stared long enough at Velasquez's work last Thursday, I think I see what she means.
In the meantime, we've moved on to Seville, where it's currently 36 degrees celsius. There's a puppetry festival in town, as well as lots of religious devotees. They sort of go together, I think.
P
Posted by Peter Dickinson at 2:32 AM