At breakfast at our hotel in Tel Aviv two days ago, I read in the Jerusalem Post--following an item about Toronto mayor Rob Ford apparently being caught on video smoking crack (!)--that David Beckham was retiring from the football pitch at age 38. Funny how Becks has remained such a trusted traveling companion all these years (see chapter 3 of World Stages, Local Audiences for more about what I mean by this), his global brand iconicity punctuating the performance (and the politics) of some of my more significant trans-Atlantic voyages.

Appropriate, then, that at the Tel Aviv Museum of Art, which is currently featuring a retrospective of Scottish artist Douglas Gordon's work, I should have lingered longest over Zidane, the film he co-directed with Philippe Parreno (see my entry two posts ago on his conceptualization of the Duchamp show at the Barbican in London). Using 17 synchronized cameras, Gordon and Parreno follow the French footballer in real time throughout the course of a single match. It's mesmerizing, even at its most banal, when Zidane is just standing around with nothing to do (which happens to be a lot of the time). So recognizable with his bald pate, Zidane here gets a media memorialization befitting his athletic genius, unlike the famous head-butt that marked his exit from the 2006 World Cup and, as it turned out, from professional competition.

Zidane is one of the few visible Arabs I have so far seen in Tel Aviv, virtual or otherwise. Granted, our movements have mostly been confined to the more touristic enclaves of the city. However, I am surprised at the extent to which the Jewish and Arab populations remain segregated here, with the latter clearly the underclass (along with Africans and Fillipinas) that, together with foreign dollars, keeps this false economy afloat. Even the most casual and superficial of glances at the heartbreaking state of disrepair in which most of the Bauhaus-designed buildings of Tel Aviv's UNESCO-designated White City find themselves (although the bucolic photo below belies this statement), or at the numbers of young people who are clearly unemployed, indicates that, beyond money for the military, there is almost no infrastructural support in Israel. 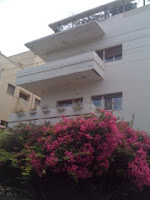 Of course the cultural divide in the region was not always the norm. The old port of Jaffa stands as testament to a time when Arabs and Jews lived and worked and played side by side, a legacy whose traces remain in a shared architectural style, shared cuisine, shared gestures and shared warmth of human interaction. All that came to an end, however, with the Balfour Declaration (there's so much for which we can blame the British), one consequence of which was the founding of the first settlements of what would eventually become Tel Aviv by Jews fleeing the Arab uprisings in Jaffa. Today the Arab Hebrew Theatre of Jaffa works to repair some of the consequences of that history (see photo below)  and, sitting a stone's throw from where Perseus is said to have rescued Andromeda from the rocks to which she had been tied by her father, speaks eloquently to the power and politics of performance. 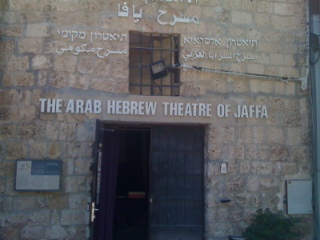 Those first settlements of Tel Aviv in the 1920s were in the area known as Neve Tzedek, which today retains its turn-of-the-century charm (narrow winding streets, old low buildings opening onto hidden courtyards), only now supplemented by trendy boutiques and restaurants. Tucked away along Shabazi Street in this area is the Suzanne Dallal Centre, home to Batsheva Dance Company, whose current world premiere, The Hole, by Artsitic Director and choreographic genius Ohad Naharin, Richard and I took in last night.

The piece is site-specific, made in direct response to the unique and intimate Varda Hall, where Batsheva performs much of its work. To this end, the hall--which I imagine is a fairly standard square studio space, has in this instance been transformed into an octagonal, with an eight-sided elevated stage in the middle, and with the audience distributed evenly around it. The action, however, begins above and behind the audience, as, soon after the lights dim, eight male dancers emerge from hidden crawl spaces and begin a sequence of simple, spotlit unison movements on narrow platforms. During the course of our 360-degree survey of the men, the women emerge, stealthily crawling upon the stage, each taking an odalisque position at one of its eight lips, head in hand, knees bent and hanging over the edge. In sync, each woman lifts her upper leg, eventually letting herself fall onto her back in a kind of supine toe-to-toe plié, before lifting her right leg over her left, letting it fall with a thud to the floor, and twisting herself into a panther pose and crawling to the next side of the octagonal. This continues for a full turn or more around the stage, the eight women above eventually being joined by a ninth below, her initially unnoticed appearance just one indication of how much there is to take in with this piece.

The Hole is essentially a showcase for Batsheva's female dancers, and Naharin has composed some stunning sequences for the nine-member corps that in their simplicity, repetition and canny combining of kinespheric and scenic space give everyone in the audience an up-close view of what's so captivating about expertly executed unison movement. Of special note in this regard is the section in which the women lie down together on successive lips of he stage, their legs hanging over the edge. They then repeat a sequence of serial movements, raising their heads, lifting their torsos, bending an elbow, turning onto their sides, and finally lifting themselves up one by one to move, in a hunched position, to the next side of the stage, where they will repeat the same sequence all over again. That, at this point in the piece, harpsichord music by Couperin is playing on the soundtrack only adds to the hypnotic effect.

Elsewhere, each of the women is given a chance to shine in improvisational solos, as walking counterclockwise around the edge of the stage they one by one take their turn in the centre, angling their limbs asymmetrically not just to their individual bodily cores, but to the geographical nexus of the group as a whole. Bearing this out, after each woman has had her chance to develop a unique movement phrase, the group devolves en masse into a riot of competing physical stylings and poses, with several of the women actually interrupting, blocking, or otherwise seeking to thwart their fellow dancers' movements.

The men, stuck on their platforms, do their best to compete for our attention, at one point erupting into preening, vogue-like, look-at-me poses that end with them shirtless, tongues hanging out, shamelessly soliciting our voyeuristic gaze. I understand that at occasional performances Naharin switches things up, putting the men on stage and the women against the walls. I have no idea if the choreography remains the same; regardless, it would be interesting to compare the effect. Not least because the men and women, who do interact at certain points from the distance of their respective spatial positions in a literal call and response manner, eventually come together--or at least partly, and not altogether predictably.

I refer to the fact that the men, having dispappeared at a certain point into the walls from which they first emerged, later reappear above us, crawling out in turn from what looks like a giant sewer pipe and spidering out onto the maze of metal pipes that sits just below the ceiling of Varda Hall. While the women continue to dance below, the men lie in wait, eventually slipping their bodies through the pipes to hang by their arms above the women. However, only one of them drops down to the stage, thereafter enacting a tentative duet with one of the women, neither partner quite knowing what to make of the other, nor what to do with their limbs, their respective reaches always exceeding--and just missing--the other's grasp. When the men lower themselves from the rafters a second time, the one among them who releases himself is caught by the women, from whose embrace he then seeks to free himself, flinging himself off the stage, only to be caught by the women again and again. They do not wish to tear him apart, like crazed Bacchanites, nor lure him to his death like the vengeful Wilis from Giselle. Rather, they introduce him to one among them, and this time the two opposite-sex bodies come together in a quietly affecting duet that ends with the men remaining above dropping little crystals that pop and crack when they hit the stage floor. Wedding rice? Hail stones? The meaning isn't immediately clear. Still, the piece ends on a graceful note, as the men lower eight swings onto the stage, which the women promptly climb upon, progressively launching their bodies out over the audience as the lights slowly dim.

As this closing image suggests, The Hole is perhaps more visually memorable than choreographically coherent, Naharin clearly in thrall to the site for which he composed the work. But there can be no denying the power of seeing the Batsheva dancers on such an intimate scale in their home venue. A performance memory of worked-through situatedness to cherish, and to set alongside--if not entirely dispel--the starker images of ethnic and religious division and uprootedness I have accumulated since moving from Tel Aviv to Jeruslaem, from whence I write this blog entry.