Veritas.trUth and Dance Machine at DOTE

Earlier this afternoon I took in two site-based works as part of the Dancing on the Edge Festival.

The first was Karissa Barry's Veritas.trUth, staged in the SFU Woodward's Cordova Street atrium and made in collaboration with students from the Modus Operandi Training Program. Six dancers, five women and one man, begin in the fetal position on the concrete plinths built into the brick risers leading towards the entrance to the Woodward's building. They are all clad in black and each sports a slash of orange paint down the length of their right arms. As a mix of house music (initially sounding quite Asian-themed) pours from two adjacent speakers, the dancers slowly unfurl their bodies, raising those orange arms skyward and gradually rising to a standing position. Weaving in and out of patrons sitting along the risers, the dancers eventually make their way to the accessible ramp running the length of the building, bopping up and down in a row behind it, almost as if they were in a studio inside practicing at the barre. Mixing hip-hop moves with parkour-inflected athleticism, Barry's choreography makes clever use of the built environment, with all the dancers eventually ending up on a single plinth, looking out into the courtyard and raising those orange arms in what one only imagines is a kind of group salute.

Then it was onto my bike for a quick ride through Strathcona and a final destination of battery opera's Hopbopshop at the foot of McLean Drive at Powell Street. There Lee Su-Feh, in collaboration with architect Jesse Garlick and dance artist Justine Chambers, has installed what she is calling the "beta version" of Dance Machine, a choreographic "environment" consisting of a series of bamboo poles attached to pulleys threaded through a central steel mechanism affixed to the ceiling; below the bamboo, on the floor, is a carpet of cedar boughs. Beginning yesterday and continuing through to the end of the DOTE Festival this Saturday, Lee and and her collaborators have invited several guest artists from the Vancouver dance community to interact with the machine. When I arrived today, the 605 Collective's Josh Martin was wrestling with the poles like a latter-day Samson (minus the hair): gathering them all up into his massive arms like spaghetti about to be thrown in a pot; carefully spreading them out from his back like wings; and bringing them horizontal so that he might wrap his legs around them, like the survivor of a shipwreck clinging to a makeshift raft. The smell of the cedar boughs as Martin trod upon them and ground them into his body while he was on the floor provided an added sensory element to the proceedings, as did the sound of the clinking bamboo, an extra bit of timpani to accompany the background music that was playing. 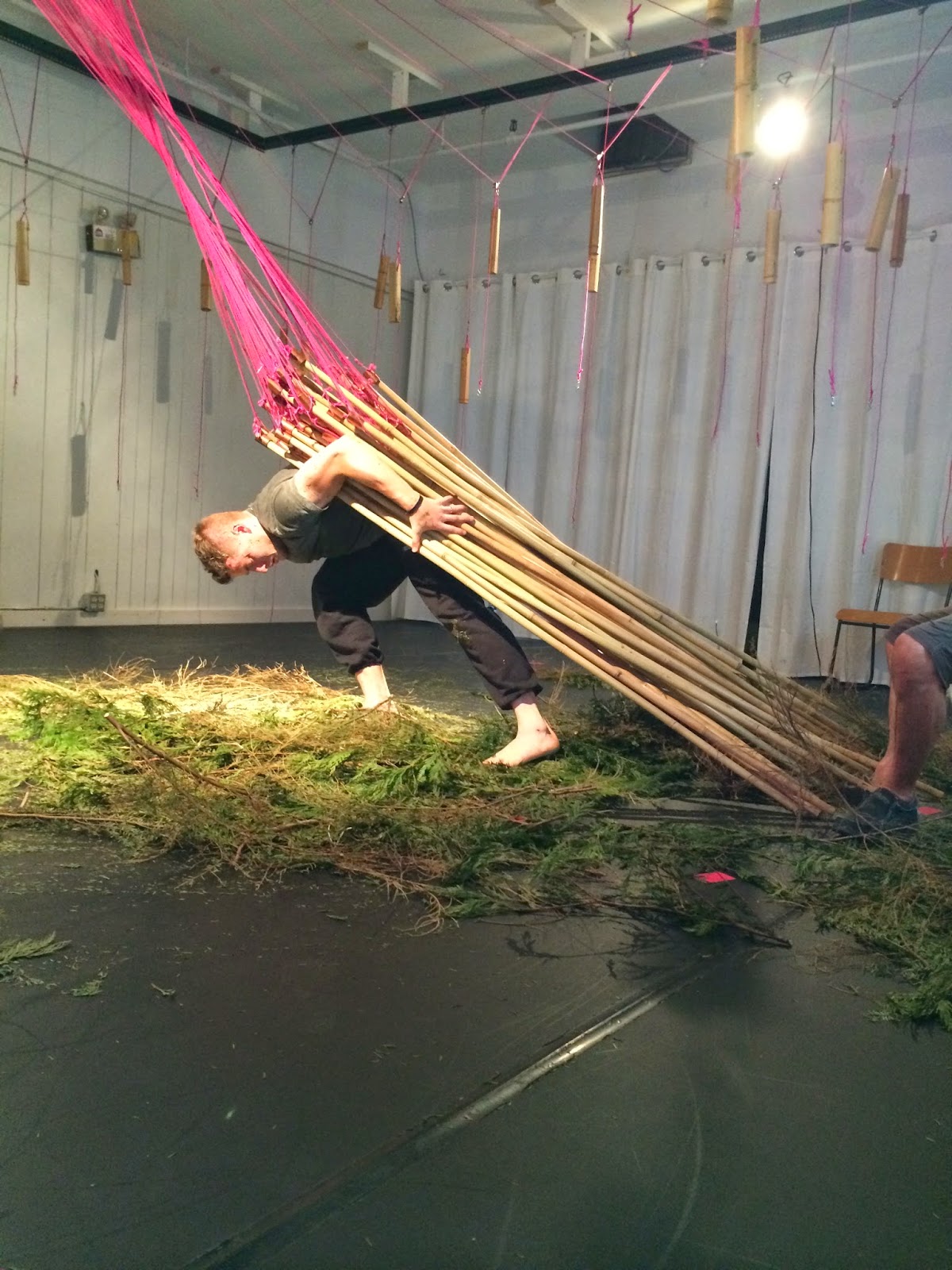 Josh Martin wrestling with the Dance Machine, The Hopbopshop, July 10, 2014

Chambers (who, incidentally, has an immersive work of her own--Family Dinner--at this year's DOTE Festival) said to me as I was leaving that each of the guest artists has been given some basic principles to work with in relation to the machine; apart from that, they are free to move and interact with it as they see fit. That the room--and consequently those of us inside it as spectators--is also made to move as a result is part of the quintessentially heterodox "dance-making" we have come to expect from Lee and her battery opera collaborators.

I bet, however, it's a pain to disentangle all that bamboo.